Hamid was 15, when his parents were killed by the Taliban. Part of the Hazara tribe, he was of a despised caste in Afghanistan. It was something he couldn’t hide – traditionally being thought to be of Mongolian descent the Hazara people have facial features, that distinguish them from the rest of the population.

At 16 Hamid was on the road. In the hands of human traffikers, often in the back of lorries. Running from his rural home, where insurgent fighting would see him killed or forced to kill, Hamid crossed national boundaries until he arrived in the UK. I never asked him why Britain, but I foolishly asked, one day, if this was the most difficult border to cross. He laughed. ‘No’ he said – ‘because this was a border I was not shot at’. It brought home to me the experiences of a young life that I was never going to be able to comprehend.

Hamid arrived without any contacts. After an initial application for asylum was rejected he found himself on the streets in London. He was beaten up more than once. He still suffers headaches that he puts down to being kicked in the head several times.

When I met him he was in a catch 22. His rejected asylum application meant he was now living here illegally. He was not allowed to work, yet not allowed to collect benefits. He slept in a room with other young Afghan men, and worked as cheap labour for a pizza shop in Stevenage. He saved up his money to pay solicitors to reapply for asylum.

His experiences, both at home and here in the UK took their toil. He suffered panic attacks and depression. He was alone. Friendless. Fearful. Rejected. There was no where on this planet that he was welcome or wanted. Politics, policies and prejudices meant the world had rejected him. His demons were many. He may as well have been living among the tombs. 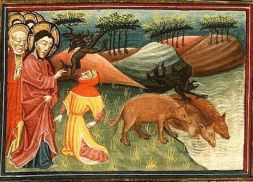 In the story in the gospel today, Jesus steps into the territory of the rejected. A man hounded by demons and driven out from the community is found by Jesus, living among the tombs. We may also note that Jesus, a Jew, has now entered Gentile territory – for him this is another barrier of uncleanness to broach, made all the more apparent by the pigs – forbidden, unclean animals of the Jewish people – but here on the scene used as an agent by Jesus to drive out the demons from this man.

This Garasene Demoniac is a man rejected. And yet here, in Luke’s gospel, we see Jesus greet him, ask his name, drive out the demons – and importantly, restore him to community. It is a story about healing – however you might interpret these demons today – but it a story also about identity and restoration.

When Jesus asks his name, the man, can only respond – “Legion”, meaning many. It’s not the name his parents gave him. Somewhere in this illness his own identity has been swallowed, instead he is known solely as the things that torment him.

Hamid’s torments and many names were no less real. Asylum seeker. Illegal Immigrant. Afghan. Hazara. Muslim. Homeless. Young man. Unemployed. These were his names, these became his demons. And they too were legion, many.

Yesterday, Thomas Mair, the man arrested for the murder of the MP Jo Cox, was asked to confirm his name as he stood in the dock. My name is Death to traitors. Freedom to Britain, he declared.

We don’t know much about Thomas Mair, or his motives – things will emerge no doubt in time, but whether mental illness, or his own sense of rejection, or a constant feeding of far right propaganda, or a combination of all of these, his demons too, I’m sure, are many. Somewhere he has lost his own identity. Because, ultimately, like Hamid, like this man from the tombs, like Jo Cox, like the injured and dead from the Orlando massacre this week, like all who are perpetrators and victims of rejection and violence, he, like them, like us – is a child of God. It is our ultimate identity. And it is an identity that we are called to recognize in every human being on this planet.

And every time we lose sight of that, every time we reduce people to their gender or sexual orientation, or education, or nationality, or political allegiance, or religion or fail to recognize our common humanity under God, then we too become bearers of those demons that divide and bind. It’s not that these things aren’t real or important, but when we see difference as a thing to keep us apart, rather than seeing within it the unique touch of God upon each person he has made, we too play a part in the world where the man is chained to a tomb, or the Hamid’s find no place where they belong. 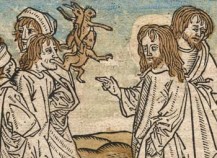 ffrey John, writing about this passage from Luke, notes the very political language involved. Legion- of course a reference to a Roman army, that enormous political power, as too with the number 2,000 for the pigs, the same number of a Roman battalion. Several of the Greek words are military in term, the pigs were commanded, and they charged – Jeffrey John sees in this a theme which runs through the New Testament where supernatural forces are closely identified within the machines of political powers of oppression.

During the struggle for civil rights in the 1960’s one theologian wrote: “Already the demons are being named. The enemy identified. Its names are legion. Racism is a demon. Poverty is a demon. Powerlessness is a demon. And those who prop them up are demonic in effect. A strategy of liberation includes a ministry of excorcism, the naming and casting out of demons”.

I wonder, in our politics today, what demons you could identify and name`?

Of course, politics, can be great force for good as well as ill. Order and protection of citizens, policy making to create a fairer world, protection of the weak and vulnerable, creating economies that allow people to flourish and provide for resources for health and education. It is why the murder of Jo Cox this week has been such an increasingly horrifying event as more and more has been uncovered of her past contributions to organisations such as Christian Aid and Oxfam, and also her desire to enter politics stemming from, as her husband Brendan said this week “her belief in a better world, which she fought for every day of her life”. And as a quote attributed to her this week read: “we are far more united and have far more in common with each other than things which divide us”. Or to use the words from St Paul in our readings to the Galatians also this morning: ‘there is no Jew or Greek, no male or female, no slave or free, for all are one in Christ Jesus’.

Hamid, if you’re interested, was eventually given permanent leave to remain. It just required someone to take time to listen to his story, help him write his case, and testify to his good character. Really it required someone to see him as human – and a political system that was willing, in his case, to welcome the outcast. He now drives taxis in Stevenage. He now has a place in our community. Maybe one day he’ll give you a ride. You never know. Next time you take a taxi, perhaps ask the driver his name.