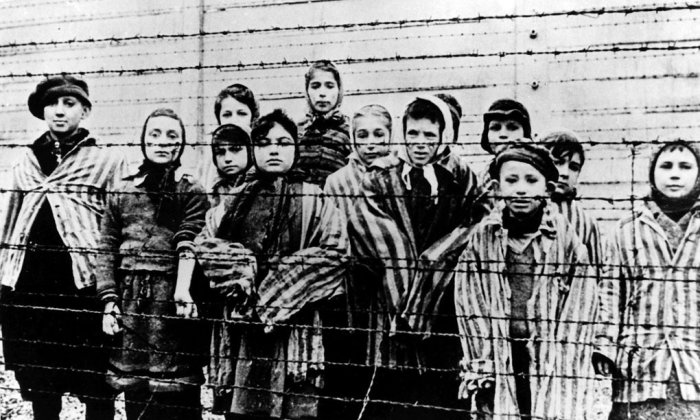 You may have heard in the news this week, Stephen Fry, a man I like very much and a confessed atheist, caused a media debate when answering a hypothetical question in an interview about what he would say to God if he met him;

“Suppose it’s all true, and you walk up to the pearly gates, and are confronted by God,” he was asked “What will you, Stephen Fry say to him, her, or it?” And his answer was this: “I’ll say: bone cancer in children, what’s that about? How dare you. How dare you create a world in which there is such misery that’s not our fault? It’s not right. It’s utterly, utterly evil. Why should I respect a capricious, mean-minded, stupid God who creates a world which is so full of injustice and pain? That’s what I would say”

The presenter looked shocked but I’m not sure this shocked me. Anyone who has seen or experienced deep suffering – whether first hand through the pain or loss of a loved one, or indeed their own trials – or secondhand looking at the wider pain of the world, surely has asked this question. How can there be a good and loving God, who would allow such things? And I, and expect most if not all of us here, will have wondered that.

But I guess what really struck me this week was how Fry’s words resonated so well with people I know. Good people, friends who have no faith, little experience even of what the story of Christ is about – but also friends who perhaps do have faith, or who sit on the edge of church life – and therefore perhaps even those of us, who are gathered here. On Facebook I watched friends share his article over and over again – adding comments like ‘well said’, ‘absolutely’ or simply pressing the like button – the cyber equivalent to an enthusiastic nod of the head.

And whereas some people have jumped on it, as if all of a sudden Stephen Fry has said something very clever that has finally shown faith to be fraud, or indeed to argue the opposite – this is no purely academic exercise to win for winnings sake. These are real and fair questions. If God exists, where is he? Why so much suffering? Does he not care?

“Atheism’ says Stephen Fry, ‘isn’t just about disbelieving in God, but asking what kind of God is he?’

Of course it’s not as if this was a new question. Throughout the ages Christians and people of other faiths and none have asked the same. In fact the bible is full of people’s cries to God in their suffering, accounts of their arguing and wrestling with where he is, with whether he cares, with whether he is there.

I find myself sitting with people in some truly dreadful and dark moments of their lives. And I would be lying to say there are not occasions which make me want to weep and rail. But more than that, like most of us here, I too have had my own times of darkness and loss. And within that moments of confusion and prayers that have not been answered as I would have willed them to be.

And so actually, if I take the question as Stephen Fry has framed it, then I stand with him. “Why should I respect a capricious, mean-minded, stupid God who creates a world which is so full of injustice and pain?” he asks. And the answer surely easily has to be – I don’t. I wouldn’t respect a God like that. Or as the columnist and priest Giles Fraser puts it “I don’t believe in the God Stephen Fry doesn’t believe in”.

For whereas for Stephen Fry and for many, many more, Giles Fraser suggests, God is seen as some sort of CEO, a being with ultimate authority and power who needs to be coerced into acts of compassion, a God who fails to bring himself down to the level of the weak and vulnerable, who is removed and hard hearted; it is not so with the Christian God as I understand him to be.

No-one has ever seen God, says St John, in the verses following our gospel reading – it is God the only Son, who is close to the Father’s heart, who has made him known. Or as St. Paul puts it in the letter to the Colossians that we’ve heard this morning – “he”, Jesus, “is the image of the invisible God”. He is God’s image – if we want to know what God is like, we just have to look at Jesus. It is the central and most wonderful tenet of the Christian faith: that God has revealed himself in the person of Christ.

And so for a Christian, when we look at Jesus, we see God and then we can then ask – do we see the mean-spirited, capricious, stupid God that Stephen Fry speaks of or is there somehow another answer that speaks to us of where God is, when there is pain?

When we look at Jesus. What do we see?

And perhaps this is where I need to get personal, because pain is personal.

I remember one particular time, that for our family was I think as dark as dark can be. And we prayed and hoped and pleaded – but things went from bad to worse. And I didn’t understand, I don’t understand, and I would have walked away from faith, if it wasn’t that there was a particular moment when I was left looking at the cross. And I didn’t understand quite the mechanics of it, or where the answer would take us – but somehow I knew that that was where the answer was to be found.

Two beams of wood, which bear the world’s sorrow: here hangs God. As helpless, forsaken, and seemingly useless as we were at that time: here hangs God. A place where love bore pain, just as we the love we knew caused much pain as well: here hangs God. Where all seemed finished, where darkness covered the world, where there is the deepest despair, the greatest absence and all that follows is night: here hangs God. 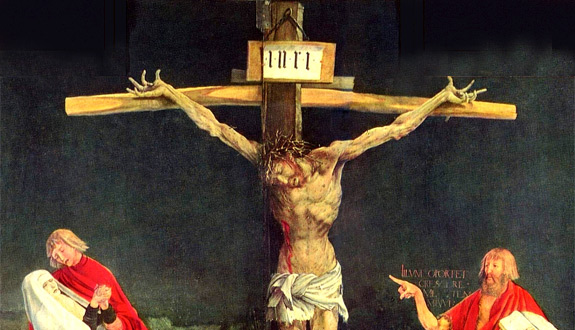 The last hymn we have just sung, contains words written by the German theologian Dietrich Bonhoeffer, written a few months before he was murdered by the Nazi’s in Flossenburg concentration camp. In it he speaks of those with faith and those without, in tested times crying to God in distress – crying for release from illness, guilt and death. But in doing so we don’t find a man of power made in the image of the superhero’s in this world, instead we find God – also poor, scorned without roof or bread. It is God’s strength found in weakness that we find when we look at Christ.

Still this is such a hard concept for the world to grasp. But as we remember Bonhoeffer killed in a concentration camp, and as we have just commemorated the 70th anniversary of the liberation of Auschwitz we may also recall the recollection of the Nobel Laureate writer Elie Wiesel of a most terrible moment in Auschwitz when he saw a child hung from the gallows. Forced to watch this atrocity one observer cried:

‘Where is God? Where is God now?’ But another person pointed to the child’s corpse and wept: ‘There he is, hanging on the gallows’.

The Christian understanding of God is not one of aloofness and distance, certainly not one of capriciousness and evil as Stephen Fry suggests – it is one of God bearing every sorrow of this world.

But it’s also not one of utter loss, for the cross is not the end of the story. In it we see the seriousness with which God takes sin and suffering. In it we see the depth of love that God has for us. But through it we also see the hope of resurrection, the chance of transformation, the promise of all things being made new – and a time when there will be no more death and tears and sorrow.

‘Atheism’ says Stephen Fry, ‘isn’t just about disbelieving in God, but asking what kind of God is he?’

“No-one has ever seen God,” says the writer of John’s gospel “It is God the only Son who is close to the Father’s heart who has made him known.”