The regime has always been harsh. You just learn to keep your head down, do as you’re told. Of course that isn’t always enough. The power of a dictator is ultimately held in place by fear, and a gripe from a neighbour, a half-truth, a rumour, can see a person dragged out, made an example of. The cities were often the places for this; floggings, beheadings, crucifixion.

But in the main, where we lived, out of the city, life was doable. We worked, we prayed, we laughed and loved. And when I met the girl, who was to be my wife – well then I really loved.

Our first journey of danger was set by the state. It was terrible timing. A census which demanded we register in the town of my ancestors. My beloved was in the final stages of pregnancy. A long journey was a risk to her and that of our child to be born, (and understand – this child is not just ours, but yours as well), but a State like this is not interested in our lives. It doesn’t operate with compassion. It is only interested in keeping order and power. They commanded: we would be fools not to obey.

The road from Nazareth to Bethlehem was long. It took us several days but we kept each other’s spirits alive thinking of what lay ahead: of family life, of a new child, of that hope for the future. Of a promise close to being birthed. 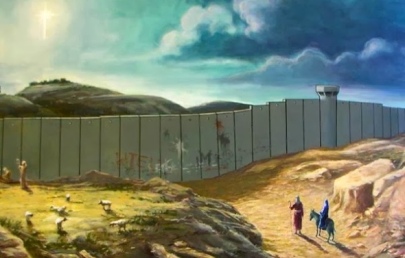 At the gates into the town the soldiers laughed when Mary stumbled. They jabbed me with their scabbard while I fumbled for our paperwork. We arrived to a place that was already heaving with strangers. So many, many people – too many to take pity on. And Mary’s labour pains had started. And I was afraid as door after door after door was closed to us – “no room, we’ve just no room, we’re full” was all we heard.

It was desperate. So we found the only place we could. And that night the child was born – a child without a home, within the stench of animal faeces, with no hospital bed, no midwife, no-one to dull the pain – we were alone and afraid. But when I wrapped that bloodied child and gave him to his mother and looked through the rafters to the stars in the sky suddenly, vulnerable as we were, it felt as if all hope had come. And we knew this child didn’t belong to us, but was for the whole world

The bedouin came to visit, those shepherds, outcasts, in the middle of night. And we laughed together that our child, (your child remember), was already calling the least and lowly to be known as friends. Then those maji appeared, with their foreign faces and their strange language and their exotic gifts – and we knew that our child, your child, was already breaking down the divisions, the barriers, the borders between people.

But despite the joy of these encounters, we didn’t sleep easy. And one night a dream warned us to flee. Herod had heard of your child and he was threatened. And power under threat is very dangerous indeed.

So we had to leave, again under cover of night. As we walked though towns and cities our bodies ached, Mary still bleeding, your child crying. With that sickening fear which grips with every passing soldier, as the baby is bundled beneath its mother’s clothes: Please don’t let him be seen. Please don’t let him be heard, ‘Don’t cry little one, don’t cry’. 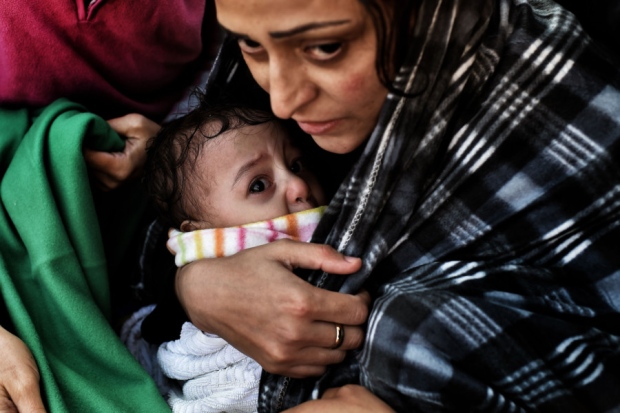 And as we walk, we are joined by others, many others: dozens, then hundreds, then we see them in their thousands, hundreds of thousands – refugees, past and present and future.

We see our ancestors, fleeing from slavery, trusting God with just the sandals on their feet and the flat bread in their bags as they wander into the wilderness with crying children at their side. We see others from our history, exiled from Jerusalem, being led defeated and hopeless into a foreign land.

Still we see more. This time the people are marked by the lack of men. Women and girls, with scarfed  heads walk out from the mist, fleeing from the horrors in Bosnia. They have few men. The fathers and grandfathers and young boys now know home as the cold earth of unmarked graves. 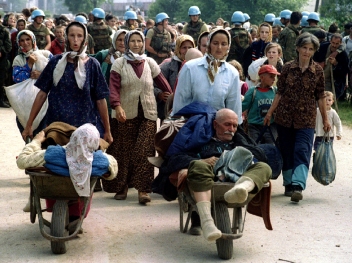 And there are more and more people joining this sorrowful trek; Eritreans running from conflict and poverty, Afghans wrung out with generations of war, Syrians whose land and lives are being blown apart. All cold and hungry and fearful. Desperate for escape, yet desperate for home.

For our child, your child, is one of these. And from his very birth, we see it is with these that he has placed himself. These are his people. This is where he can be found. And at long last, with aching bodies and worn out hearts we reach the border, with its razor wire, with its guards with their orders and procedures and this strange country with its politics and polls, with its own fear of foreign faces. With its tabloid headlines that line the pockets of the publishers. With its politicians who wrestle with complexities and struggle to protect their position, who fear the jeers if they look weak.

And we know we have lost our identity. We have morphed from known to numbered, from loved to loathed, from respectable to rejected.

We are told to sit. We sit through the night in the rain, and the cold, and there is no shelter and your child cries. In the morning the buses come. With pushing and shoving the people are piled onboard. We’re not sure where we’re being taken but in time it comes into view  – the rows of UN tents, row after row, row after row. The landscape is bleak. The smell is atrocious. We ache for home. 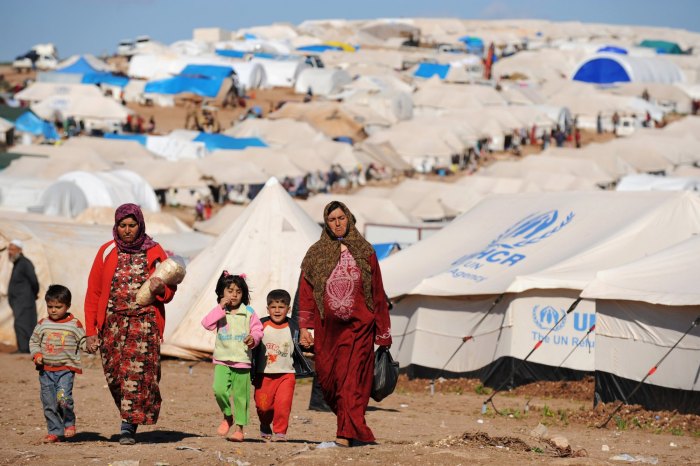